"A big, cream and white wooden structure shaped like a giant flower pedestal but with a human-size door was utterly intriguing." 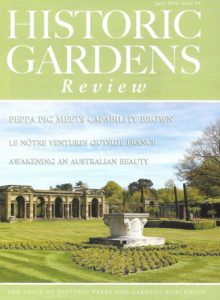 A decorative arts study tour to Helsinki in May 2016, brought an unexpected opportunity to visit Helsinki’s Botanic garden.

A major refurbishment was evidently underway but there was still much to admire, not least in the range of glasshouses chronicling the evolution of plant life.

The prospect of orange trees naturally drew me in but the real delight, and for several months a puzzle, lay outside. A big, cream and white wooden structure shaped like a giant flower pedestal but with a human-size door was utterly intriguing.

Unfortunately the photograph of the mysterious pedestal was too blurry to be included in the article subsequently commissioned by the editor of Historic Gardens Foundation’s magazine.

But it was through the HGF‘s encouragement to contact an expert on Finnish gardens, the Swiss scholar, Dr Eeva Ruoff, that the mystery was eventually solved.

Once a common feature on the streets of Helsinki and elsewhere, pavement laying and road extensions decimated their numbers. That in the Helsinki Botanic Garden survives because it was relocated and re-purposed as a garden feature. 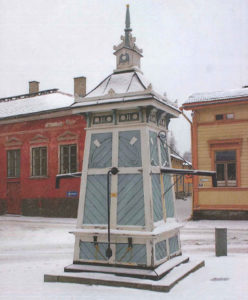 The delightful well-hut is located in Rauma, on the west coast of Finland. Image courtesy of Dr Eeva Ruoff.

Others, like this one at Rauma, on Finland’s west coast and north of the old capital, Turku, survive in situ.  Rausa’s old town with its wooden houses is  a  UNESCO World Heritage Site.

Dame Irene Ward’s life is the main focus of Helen’s research in 2015, following on from her March 2015 lecture at Westminster.

Among the highlights of Dame Irene’s long parliamentary career, her involvement in the campaign for equal pay for women is perhaps her most lasting achievement.  The following image shows women MPs elected in the 1959 General Election: 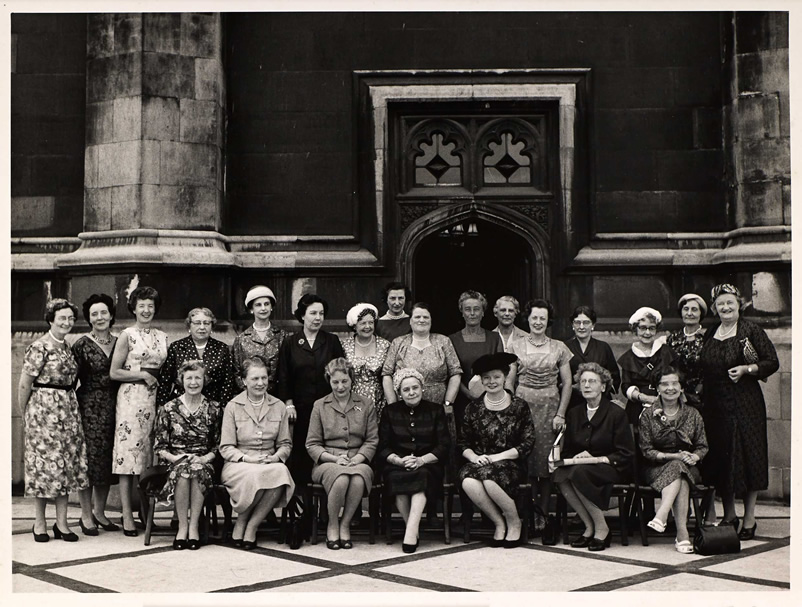 The names of the women MPs who worked closely with Dame Irene in the campaign for equal pay for women are highlighted in bold.

This research grew out of a study of the gardens created by Sir Philip Sassoon (1883-1939). Intrigued by what had once been - and may in the future be again - a very attractive building, the quest for its amateur architect, Reginald (Reggie) Cooper began in earnest in 2014.

Reginald Cooper (1885-1965) – Reggie – has proved to be an elusive figure. He appears to have left no papers, private or otherwise. There’s a tantalizing reference to him as a correspondent of the garden designer and writer, Margery Fish (1892-1969) 1, owner of East Lambrook Manor, another medieval Somerset gem in need of restoration in the 1930s, but not the content of the so far untraceable letters.

The biggest boost in the quest for Reggie Cooper has been a conversation with Mrs Mary-Anne Robb, the current owner with her husband, Alastair, of Cothay, who generously shared her knowledge of Cooper’s work and life at Cothay from 1925 to 1937.

Other key sources have been the diaries and ledgers in the Wiltshire & Swindon History Centre of the conservation architect, Sir Harold Brakspear (1870-1934) 2; Country Life articles, most of which were written admiringly by Cooper’s friend, the architectural writer Christopher Hussey (1889-1970) between 1927 and 1950 3 and English Heritage archives. Cooper has walk on parts in a handful of published sources, most notably the writings of his old school friend and British Embassy colleague, Sir Harold Nicolson (1886-1968) but his own voice is silent.

END_OF_DOCUMENT_TOKEN_TO_BE_REPLACED

2015 brings... a lecture on Irene Ward MP, a paper on Disraeli to the Oxford University TORCH symposium and plans for a seminar series marking the seventieth anniversary of the United Nations.

Seminars curated whilst at the Bodleian Library, Oxford, included the ‘Authorship, Memory & Manuscripts’ series, which ran from 2010 to 2014.

This research returns to the topic of gardens as ‘living documents’. It uses the orangery at Trent Park, Enfield as the starting point for an exploration of the gardens created by Sir Philip Sassoon (1888-1939). The two gardens examined (Port Lympne, Kent being the second) are ‘living documents’; cultural landscapes connected to the worlds of politics, the arts, and design and significant meetings in both world wars. 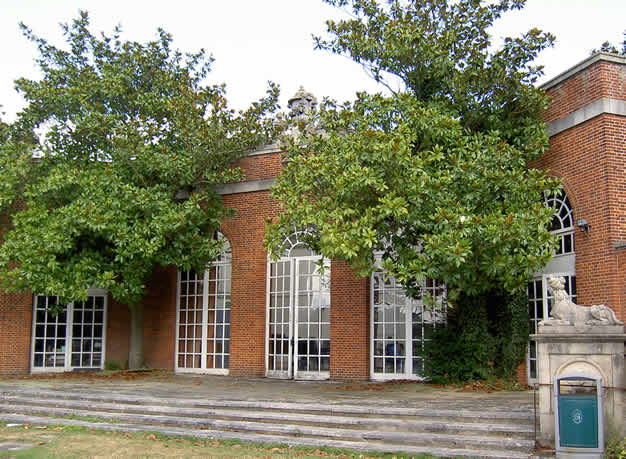 The orangery at Trent Park was built c.1931 to designs by Colonel Reginald Cooper (1885-1965) now a rather elusive historical figure. It was designed in the neo-classical style as part of Sassoon’s remodelling of the large Victorian house on the estate inherited in 1912 from his father Sir Edward Sassoon (1856-1912), from whom he also “inherited” his Hythe constituency.

Like many authentic Georgian orangeries, Trent’s combined a strategic visual location with horticultural and social roles; switching from overwintering the Versailles citrus trees to providing poolside shelter in the summer.

Trent (created from 1926) was the garden of maturity; devoid of the grandiosity of Port Lympne, more in keeping with Sassoon’s progress up the political ladder. But there are common threads.

END_OF_DOCUMENT_TOKEN_TO_BE_REPLACED

Helen has long been interested in the history of orangeries, and so was delighted to act as one of the advisers on the re-instatement of the orangery at Knole Park in late 2009/early 2010. The position brought unexpected archival dividends for her research into historic orangeries, and prompted further research using the sketch books and diaries of Sir George Scharf as a manuscript source. This article gives a first outline of some of her findings. 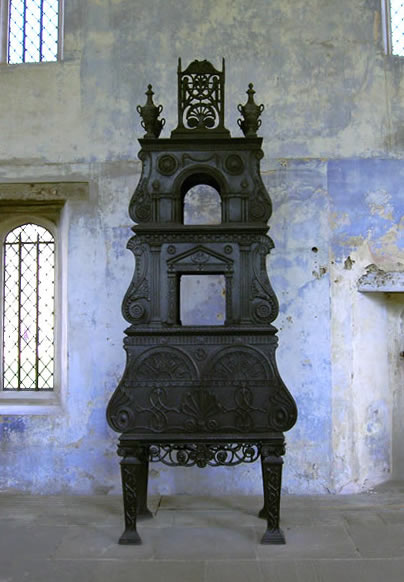 Acting as one of the advisers on the re-instatement of the orangery at Knole Park in late 2009/early 2010 brought unexpected archival dividends for my research into historic orangeries. Standing in the then empty orangery, marvelling at the amazing stove (later identified as a Buzaglo – see FIG. 1) and watching the play of the wintry light through the huge windows with their coloured glass insets, sparked a wish to return to the topic at some future date. In the autumn of 2011 the opportunity arose. With the Sackville papers temporarily unavailable while the Centre for Kentish Archives relocated to their new site, the focus of my research switched to the National Portrait Gallery Heinz Archive & Library and the papers of the Gallery’s first director, Sir George Scharf (1820-95).

Scharf was a man with a mission. Appointed Secretary to the newly-established gallery in 1857 then, from 1882, Director, he was charged with the task of collecting portraits for the new gallery. He visited many of the key historic houses of the era to make an inventory of portraits (including engravings) in private hands, as well as in public collections. The findings would also help the gallery distinguish copies, and identify the best methods of capturing images. With photography still in its infancy his sketchbooks are the pictorial record of his visits, a nineteenth century precursor to the notion of an image bank.

END_OF_DOCUMENT_TOKEN_TO_BE_REPLACED

For the University of Oxford, Department of Continuing Education Helen devised and taught a five week ‘taster’ course, ‘Place and Power’.

The course which ran in April 2009 focused on three Oxfordshire gardens:

Helen ran an extended version of the course, ‘Historic gardens in Oxfordshire: place and power’ in 2010.

Guest lecture for graduate students on the history of Nuneham Courtenay, the lost Edwardian Garden