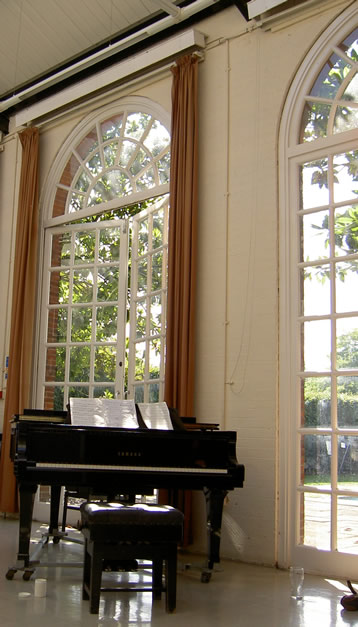 The interior of the Trent Park orangery (photographed by kind permission of Middlesex University, 2006).

Helen Langley is a historian and curator and was until her retirement in 2014 the modern political manuscripts curator at the Bodleian Library. She has also lectured on historic houses and gardens. She was elected a Fellow of the Royal Historical Society in 1995.

Helen’s interest in cultural heritage is long-standing. For many years her research as a manuscript curator at the Bodleian Library in Oxford focused mainly on the private papers of public figures. A fascination with the houses and gardens where their letters and diaries were written was furthered by participating (as a Millenium Fellow) in the commemorations marking the centenary of Erno Goldfinger in 2002, and, later, curating the Bodleian Library’s 2003-2004 exhibition for the bicentenary of the Victorian prime minister, Benjamin Disraeli (later 1st Earl of Beconsfield), 1804-1881. Subsequent contributions to interpreting Disraeli’s life included a filmed interview in 2008.

In March 2015 Helen revisited and re-evaluated representations of Disraeli’s legacy in a paper to the Oxford University TORCH symposium convened by Sandra Meyer and Megan Kearney, ‘The Many Lives of Benjamin Disraeli: Fame, Legacy and Representation.’

With a background in manuscripts and historical studies, Helen finds the notions of gardens as metaphors and living documents particularly interesting.  Helen studied the conservation of historic gardens at the Architectural Association (part time), graduating in 2006. Her dissertation topic on historic orangeries included Trent Park’s elegant 1930s’ scheme by Reginald Cooper (1885-1965), seen in the image to the right.

She subsequently researched and wrote about six orangeries belonging to the National Trust.  An article on the subject compiled by Helen appeared in the National Trust’s publication,  ABC Bulletin in July 2009.

An article by Helen, ‘The Coombe Royal Citrus Wall and the Outdoor Cultivation of Oranges in Devon’  appeared in The Devon Gardens Trust Journal, Issue 2.

For the University of Oxford, Department of Continuing Education she devised and taught a five week ‘taster’ course, ‘Place and Power’. The course which ran in April 2009 focused on three Oxfordshire gardens: Nuneham Park, Ditchley Park and Buscot Park.  Helen ran an extended version of the course, ‘Historic gardens in Oxfordshire: place and power’ in 2010.

The next project brought a return to writing about manuscripts. To commemorate the centenary of the journalist Honor Balfour in 2012 Helen wrote ‘Honor Balfour and the Liberal Party: an archival perspective’ which subsequently appeared in the Journal of Liberal History.

The emphasis on twentieth century figures continues. 2015 brought the wonderful opportunity to deliver the Speaker’s Advisory Committee of Works of Art International Women’s Day lecture, ‘Irene Ward MP, later Baroness Ward of North Tyneside (1895-1980), doughty parliamentarian and campaigner’.  Since then there has been a seminar paper on Baroness Ward; talks on Lady (Nancy ) Astor (1879-1964) and Honor Balfour (1912-2001) and a guest contribution to the Vote 100 blog. Helen’s most recent lecture was to the Oxfordshire Gardens Trust in 2019.

The publication by the Journal of Liberal History of Helen’s article, ‘What Honor did next…’ completes her research into the broadcasting career of Honor Balfour. For her current research project Helen has resumed ‘the quest for Reggie Cooper’.

Stephen Bonarjee (1912-2003), and the early years of current affairs reporting at the BBC. Bonarjee, an exact contemporary of Honor’s, was an innovatory radio producer working across a range of talk programmes. Now perhaps best remembered for the Today programme, Start the Week and and Ten O’clock, the forerunner of The World Tonight. But having worked through some of his files in the BBC Written Archives Centre for the Honor Balfour article it is the early programmes to which I’d like to return.