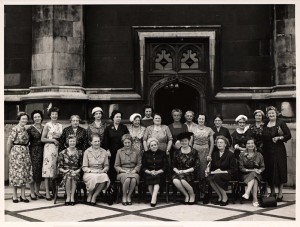 A (very minor) contributor to an exhibition at the Soldiers of Oxfordshire Museum in Woodstock. Scheduled for Spring 2020 the opening was postponed by the pandemic until October 2020 but shortly afterwards new national lockdown restrictions were introduced.

The invitation to contribute information arose from my past work on Dame Irene Ward. The campaign by Dame Irene (later Baroness Ward of North Tyneside, 1895-1980) for the release of Special Operations Executive (SOE) files and the commissioning of an official history of the organisation began in the mid1950s when she was Conservative MP for Tynemouth. It was partly inspired by the refusal to allow access to SOE files while researching her history of the First Aid  Nursing Yeomanry, F.A.N.Y Invicta (1955) which includes a chapter on members who became agents in ‘The Org’: SOE.

As a lifelong campaigner against injustice (most recently for equal pay for women, culminating in the 1954 Act), she was driven to champion those whose exploits remained buried in closed files; overshadowed by films about famous agents; memoirs by the former head of SOE’s French section, Colonel Maurice Buckmaster (1902-1992) among others, and speculative histories. A study by the historian M R D Foot was eventually published in 1966. Her contribution to the commissioning may not have been as great as she believed but it was not inconsiderable.