With the publication of the article 'What Honor did next, the pioneering broadcasting career of Honor Balfour (1912-2001)', in the Journal of Liberal Democrat History, a very enjoyable period spent researching her remarkable life comes to a close. 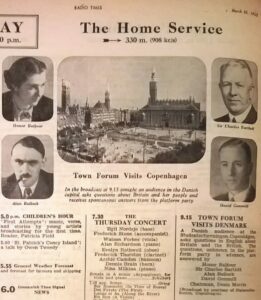 With the publication of the article on Honor’s broadcasting career, a very enjoyable period spent researching her remarkable life comes to a close.

Back in 2018 I only knew she’d been involved in one or two radio programmes. The first of what became many visits to the BBC Written Archives Centre pointed to her far greater involvement, especially in the early years of current affairs broadcasting.

At the British Library where BBC audio visual material is viewed, I was captivated by the sight of Honor in her prime, appearing on Press Conference in April 1959, a member of the panel interviewing Eleanor Roosevelt (1884-1962).

Honor’s pioneering time at Picture Post and at the BBC have undeservedly slipped into history’s byways. It’s time she was restored to her rightful place.